Middle-aged people could add years to their lives just by getting off the couch and going for a walk every day — though it wouldn’t hurt to do even more, a large new study suggests.

The researchers followed over 100,000 Americans for decades and found what many have shown before: People who exercise as much as health experts recommend tend to live longer.

According to those recommendations, adults should strive to exercise moderately for 150 to 300 minutes a week, through activities like brisk walking. The other option is to go for sweatier activities, like jogging or biking at a fast clip, for 75 to 150 minutes each week.

In this study, middle-aged people who met those goals were about 20% less likely to die over the next 30 years.

But while hitting those goals was good, the study found, surpassing them was a bit better.

People who regularly got two to four times the recommended amount of exercise — moderate or vigorous — shaved a few more percentage points from their risk of dying during the study period.

Experts stressed that the most important thing is to get moving regularly, as doable amounts of activity are better than none at all.

However, to get the “maximal benefit” in terms of longevity, it’s a good idea to spend more time being active, said Lee, a research associate at the Harvard School of Public Health in Boston.

The findings, published July 25 in the journal Circulation, are based on more than 100,000 U.S. health professionals taking part in two long-running health studies. At the outset in the 1980s, participants completed questionnaires on their lifestyle habits and medical histories, and then repeated that every two years.

Over the next 30 years, just under 47,600 participants died. That risk was lower among people who’d been regularly active over time — even when factors like body weight, diet habits and smoking were taken into account.

People who met the recommended exercise amounts were about 25% to 31% less likely to die of heart disease or stroke, versus their sedentary peers. Their risk of death from non-cardiovascular causes was also cut, by 15% to 20%.

For exercisers who were surpassing the recommended amounts by two to four times, the longevity benefits were a bit larger.

Still, the findings suggest that people have the most to gain when they move from being sedentary to meeting the recommended exercise goals.

“I tell my patients that doing something is always better than doing nothing,” said Dr. Erin Michos, associate director of preventive cardiology at Johns Hopkins University in Baltimore.

Michos, who was not involved in the study, said people should find activities they enjoy so that moving becomes a long-term habit.

She also stressed that the new findings do not mean that people have to go for a run every day — a discouraging prospect for many. Any movement throughout the day — taking a walk, climbing stairs, doing chores — counts as physical activity, Michos said.

“If you’re already getting the recommended amount of exercise, you might benefit from doing a little more,” Michos added.

But, she noted, 50% of Americans are not meeting those goals.

Regular physical activity has numerous health benefits, said Donna Arnett, a past president of the American Heart Association and a professor at the University of Kentucky’s College of Public Health.

Some people start exercising in the hopes of losing weight, but Arnett said that diet changes are the main driver of weight loss (although exercise helps keep any lost pounds off). The good news is, people of any weight stand to reap the health benefits of exercise, Arnett said. 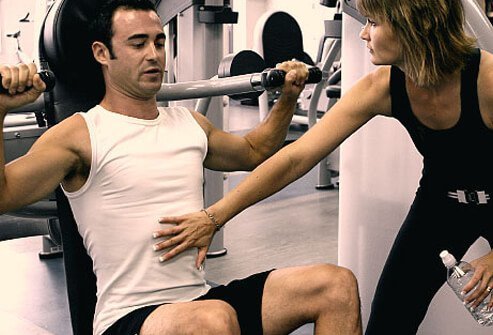 She and Michos pointed to another finding from the study: The heaviest exercisers — topping 600 minutes of moderate activity, or 300 minutes of vigorous exercise, per week — did not see any longevity gains, versus relatively less active folks. But there was no evidence it harmed them, either.

Michos, who runs marathons, called that reassuring, since there have been some concerns that long-term high-intensity exercise could present heart risks.

“But for most Americans,” she noted, “the issue is that they’re getting too little exercise, not too much.”

The American Heart Association has advice on physical activity.