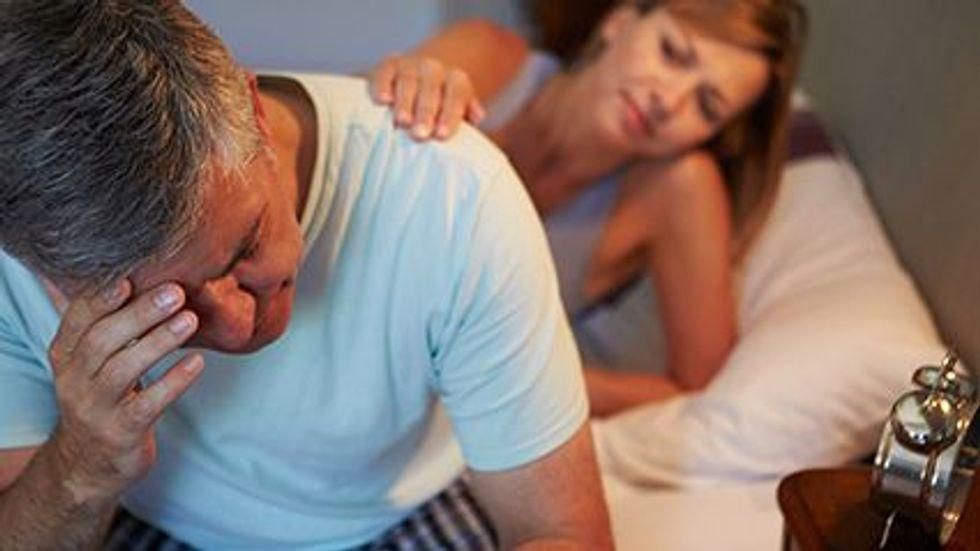 Men, take note: An unhappy marriage might end in divorce, but staying unhappily hitched could also raise your risk of stroke or early death, a new Israeli study suggests.

The increased risk was as much as that seen with smoking or a ‘couch potato’ lifestyle, said lead researcher Shahar Lev-Ari, chair of health promotion at Tel Aviv University School of Public Health.

Israeli men who expressed dissatisfaction with their marriage were 94% more likely to suffer a stroke during three decades of follow-up, and 21% more likely to die from any cause.

By comparison, a history of smoking increased the men’s risk of death by 37%, and an inactive lifestyle by 21%, the researchers said.

“Assessing marital satisfaction and appraising the health benefits of marital education programs for young couples should be implemented as part of health promotion strategies for the general population,” Lev-Ari believes.

What’s the link? Men unhappy in their marriage might be more likely to suffer from problems like depression, anxiety and stress, all of which can increase stroke risk, experts said.

They also might be more likely to cope with those feelings through unhealthy behaviors like drinking, smoking, eating bad foods or using drugs.

“When we feel good about our interpersonal relationships, we feel happy and engage in healthy behaviors,” said Brittany LeMonda, a senior neuropsychologist at Lenox Hill Hospital in New York City. “When we don’t feel good about those around us, we are more likely to engage in less-than-ideal behaviors, have more anxiety, and disrupted sleep.”

For the study, Lev-Ari and his colleagues recruited nearly 9,000 male Israeli civil servants and city workers, who underwent an extensive appraisal of their health and behavioral patterns. The research team then tracked the health of these men for 32 years.

The results align with earlier studies that have shown an unhappy marriage can take a toll on the longevity of both husbands and wives, Lev-Ari said.

One 2019 study from the journal Psychological Science found that being happy with your spouse could decrease your death risk by 13% or more during an eight-year follow-up, Lev-Ari said.

“Studies suggest that educating and training young couples on positive psychology techniques, communication skills and parenting strategies may be beneficial for developing family resilience and enhancing marital satisfaction,” Lev-Ari said. “These techniques may be usefully implemented as part of health promotion strategies designed for the general population.”

LeMonda, who had no role in the study, noted that parenthood is also generally associated with longevity.

“It’s possible that those in unhealthy marriages are less likely to have children or may have more stressful situations related to their children,” she said.

“This study sheds light on the importance of healthy relationships and our need of strong social support and feeling connected to those we love,” LeMonda concluded.

The new study was published recently in the Journal of Clinical Medicine.

Harvard Medical School has more on the health benefits of marriage.