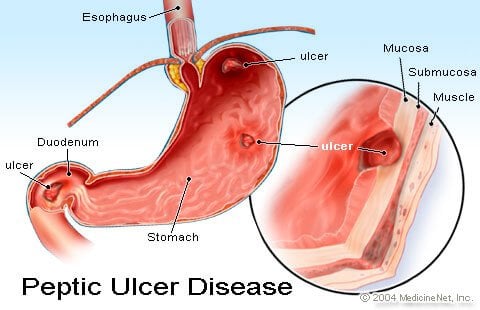 Peptic ulcers may not be painful for some people, but for others the pain is constant.

Bleeding ulcers are a big deal. Often having endoscopy is diagnostic and therapeutic. A gastroenterologist can use a fiberoptic camera to view the inside of the stomach and duodenum, searching for a source of bleeding.

Symptoms of a bleeding ulcer include:

What is a peptic ulcer?

Peptic ulcers occur when the lining these organs is eroded by the acidic digestive (peptic) juices that the cells of the lining secrete of the stomach secrete. A peptic ulcer differs from an erosion because it extends deeper into the lining and incites more of an inflammatory reaction from the tissues that are involved, occasionally with scaring. Peptic ulcer also is referred to as peptic ulcer disease.

Peptic ulcer disease is common, affecting millions of Americans yearly. Moreover, peptic ulcers are a recurrent problem; even healed ulcers can recur unless treatment is directed at preventing their recurrence. The medical cost of treating peptic ulcer and its complications runs into billions of dollars annually. Recent medical advances have increased our understanding of ulcer formation. Improved and expanded treatment options now are available.

The pain of ulcer disease correlates poorly with the presence or severity of active ulceration. Some individuals have persistent pain even after an ulcer is almost completely healed by medication. Others experience no pain at all. Ulcers often come and go spontaneously without the individual ever knowing that they are present unless a serious complication (like bleeding or perforation) occurs.

What are the early signs and symptoms of peptic ulcers?

Symptoms and signs of peptic (esophageal, duodenal, or stomach) ulcers disease vary. Some people with stomach ulcers do not have any symptoms or signs while others may have a few or several.

The most common symptom of a peptic ulcer is a dull or burning pain in the stomach. The pain may be felt anywhere between your belly button and breastbone. Pain from a peptic or stomach ulcer:

Peptic ulcer other symptoms and signs that are less common include:

For many years, excess acid was believed to be the major cause of ulcer disease. Accordingly, the emphasis of treatment was on neutralizing and inhibiting the secretion of stomach acid. While acid is still considered necessary for the formation of ulcers and its suppression is still the primary treatment, the two most important initiating causes of ulcers are infection of the stomach by a bacterium named “Helicobacter pylori” (H. pylori) and chronic use of nonsteroidal anti-inflammatory medications or NSAIDs, including aspirin. Cigarette smoking also is an important cause of ulcers as well as failure of ulcer healing.

Infection with H. pylori is very common, affecting more than a billion people worldwide. It is estimated that half of the United States population older than age 60 has been infected with H. pylori. Infection usually persists for many years, leading to ulcer disease in 10% to 15% of those infected. In the past, H. pylori was found in more than 80% of patients with gastric and duodenal ulcers. With increasing appreciation, diagnosis and treatment of this infection, the prevalence of infection with H. pylori as well as the proportion of ulcers caused by the bacterium has decreased. It is estimated that currently only 20% of ulcers are associated with the bacterium. While the mechanism by which H. pylori causes ulcers is complex, elimination of the bacterium by antibiotics has clearly been shown to heal ulcers and prevent their recurrence.

NSAIDs are medications used for the treatment of arthritis and other painful inflammatory conditions in the body. Aspirin, ibuprofen (Advil, Motrin), naproxen (Aleve, Naprosyn), and etodolac (Lodine) are a few examples of this class of medications. Prostaglandins are substances produced by the body, which are important in helping the linings of the esophagus, stomach, and duodenum to resist damage by the acidic digestive juices of the stomach. NSAIDs cause ulcers by interfering with the production of prostaglandins in the stomach.

Cigarette smoking not only causes ulcers, but it also increases the risk of complications from ulcers such as bleeding, obstruction, and perforation. Cigarette smoking also is a leading cause of failure of treatment for ulcers.

Contrary to popular belief, alcohol, coffee, colas, spicy foods, and caffeine have no proven role in ulcer formation. Similarly, there is no conclusive evidence to suggest that life stresses or personality types contribute to ulcer disease. 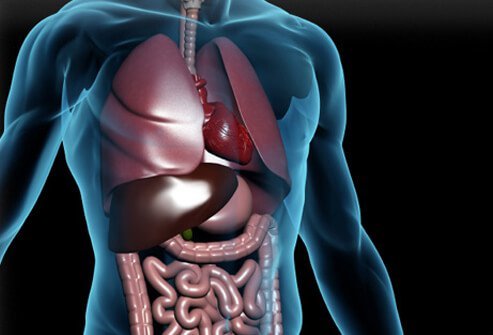 An upper gastrointestinal endoscopy is more accurate than X-rays, but usually involves sedation of the patient and the insertion of a flexible tube through the mouth to inspect the esophagus, stomach, and duodenum. Upper endoscopy has the added advantage of having the capability of removing small tissue samples (biopsies) to test for H. pylori infection. Biopsies are also examined under a microscope to exclude a cancerous ulcer. While virtually all duodenal ulcers are benign, gastric ulcers can occasionally be cancerous. Therefore, biopsies often are performed on gastric ulcers to exclude cancer.

Is there a diet for peptic ulcers? Can you drink alcohol?

There is no conclusive evidence that dietary restrictions and bland diets play a role in ulcer healing. No proven relationship exists between peptic ulcer disease and the intake of coffee and alcohol. However, since coffee stimulates gastric acid secretion, and alcohol can cause gastritis, moderation in alcohol and coffee consumption is recommended.

What is the treatment for peptic ulcers?

The goal of ulcer treatment is to relieve pain, heal the ulcer, and prevent complications. The first step in treatment involves the reduction of risk factors (NSAIDs and cigarettes). The next step is medications.

Many people harbor H. pylori in their stomachs without ever having pain or ulcers. It is not completely clear whether these patients should be treated with antibiotics. More studies are needed to answer this question.

Eradication of H. pylori prevents the return of ulcers (a major problem with all other ulcer treatment options). Elimination of this bacteria also may decrease the risk of developing gastric cancer in the future.

Treatment with antibiotics carries the risk of allergic reactions, diarrhea, and sometimes severe antibiotic-induced colitis (inflammation of the colon).

Antacids neutralize existing acid in the stomach. Antacids such as Maalox, Mylanta, and Amphojel are safe and effective treatments. However, the neutralizing action of these agents is short-lived, and frequent dosing is required. Magnesium containing antacids, such as Maalox and Mylanta, can cause diarrhea, while aluminum containing agents like Amphojel can cause constipation. Ulcers frequently return when antacids are discontinued.

Studies have shown that a protein released in the stomach called histamine stimulates gastric acid secretion. Histamine antagonists (H2 blockers) are drugs designed to block the action of histamine on gastric cells and reduce the production of acid. Examples of H2 blockers are cimetidine (Tagamet),  nizatidine (Axid), and famotidine (Pepcid). While H2 blockers are effective in ulcer healing, they have a limited role in eradicating H. pylori without antibiotics. Therefore, ulcers frequently return when H2 blockers are stopped.

Generally, H2 blockers are well tolerated and have few side effects even with long-term use. In rare instances, patients report headache, confusion, lethargy, or hallucinations. Chronic use of cimetidine may rarely cause impotence or breast swelling. Cimetidine can interfere with the body’s ability to handle alcohol. Patients on these drugs who drink alcohol may have elevated blood alcohol levels. These drugs also may interfere with the liver’s handling of other medications like phenytoin (Dilantin), warfarin (Jantoven, Coumadin), and theophylline. Frequent monitoring and adjustments of the dosages of these medications may be needed.

Sucralfate (Carafate) and misoprostol (Cytotec) are agents that strengthen the gut lining against attacks by acidic digestive juices. Sucralfate coats the ulcer surface and promotes healing. Sucralfate has very few side effects. The most common side effect is constipation and the interference with the absorption of other medications. Misoprostol is a prostaglandin-like substance commonly used to counteract the ulcerogenic effects of NSAIDs. Studies suggest that misoprostol may protect the stomach from ulceration among people who take NSAIDs chronically. Diarrhea is a common side effect. Misoprostol can cause miscarriages when given to pregnant women and should be avoided by women of childbearing age.

What are the complications of peptic ulcers?

With modern treatment, people with ulcer disease can lead normal lives without lifestyle changes or dietary restrictions. Cigarette smokers have been found to have more complications from ulcers and treatment failure.

Eradication of the bacteria H. pylori not only heals ulcers but also prevents the recurrence of ulcer disease.

Patients with ulcers generally function quite comfortably. Some ulcers probably heal even without medications (though they probably recur as well). Therefore, the major problems resulting from ulcers are related to ulcer complications. Complications include:

Patients with bleeding ulcers may report:

Patients with persistent or severe bleeding may require blood transfusions. An endoscopy is performed to establish the site of bleeding and to stop active ulcer bleeding with the aid of specialized endoscopic instruments.

Perforation through the stomach leads to the leakage of stomach contents into the abdominal (peritoneal) cavity, resulting in acute peritonitis (infection of the abdominal cavity). These patients report a sudden onset of extreme abdominal pain, which is worsened by any type of motion. Abdominal muscles become rigid and board-like. Urgent surgery usually is required. A duodenal ulcer that has perforated can burrow into adjacent organs such as the pancreas or behind the abdomen and into the back. An esophageal ulcer that perforates can cause severe inflammation of the tissues that surround it (mediastinitis).

The obstruction usually occurs at or near the pylorus of the stomach. Endoscopy is useful in establishing the diagnosis of obstruction from an ulcer and excluding gastric cancer as the cause of the obstruction. In some patients, gastric obstruction can be relieved by suction of the stomach contents with a tube for 72 hours, along with intravenous anti-ulcer medications, such as cimetidine (Tagamet).

What is the prognosis for a person with peptic ulcer disease? Can it be cured?

With modern treatment, people with ulcer disease can lead normal lives without lifestyle changes or dietary restrictions. Cigarette smokers have been found to have more complications from ulcers and treatment failure. Eradication of the bacteria H. pylori not only heals ulcers but also prevents the recurrence of ulcer disease.