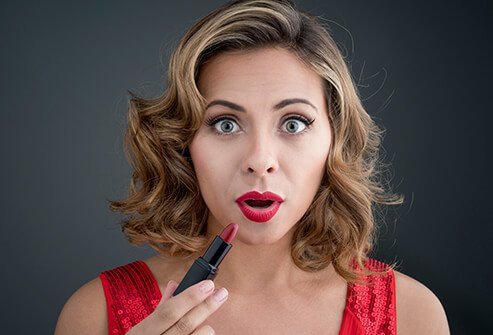 Cosmetics may irritate the skin directly (by far the most common type of reaction) or induce an immune-mediated allergic response.

What are cosmetics? What is in makeup?

Cosmetics are substances applied to the surface of the skin (moisturizers and makeup), hair (shampoos and conditioners), or nails (polish and lacquer) designed to temporarily alter one’s appearance. Cosmetics do not alter the structure or function of the skin, hair, or nails. They are often a complex mixture of perfumes, emulsifiers, sunscreens, pigments, metals, resins, and preservatives, as well as a variety of inert materials. They also frequently contain an array of exotic botanical substances (for example, essential oils) for which the manufacturer may ascribe some obscure benefit. Generally, individuals should remove cosmetics after use. They should be distinguished from permanent makeup, which is essentially a tattoo composed of pigment placed into the deeper layers of the skin with a needle. The FDA and the USDA are responsible for administering laws involving the safety and purity of cosmetics. Revenue of the U.S. cosmetics industry will be about $59 billion in 2014!

When labeling of cosmetics as hypoallergenic first became popular, the FDA attempted to regulate use of the term. In 1975, the FDA issued a regulation governing use of the term hypoallergenic, stating that a cosmetic product could be labeled hypoallergenic only if scientific studies on human subjects showed that it caused a significantly lower rate of adverse skin reactions than similar products not making such claims. The manufacturers of cosmetics claiming to be hypoallergenic were to be responsible for carrying out the required tests. But this regulation was subsequently declared invalid by U.S. courts, leaving manufacturers free to apply the term as they wish, without any required testing to prove that a product is hypoallergenic.

Read about cosmetic ingredients that may cause an allergic reaction »

What are the risk factors for cosmetics reactions?

Untoward reactions to cosmetics are reasonably common considering their extensive use. A physician will distinguish documented allergic sensitivity from simple irritation. The true prevalence of cosmetic sensitivity is unknown because affected individuals may just stop using the offending product rather than complain about it to a professional. Cosmetics may irritate the skin directly (by far the most common type of reaction) or induce an immune-mediated allergic response. Usually irritation would occur the first time an individual applies a cosmetic, as opposed to an allergic reaction that would require repeated exposures. Some individuals have extremely sensitive skin that seems to be intolerant to many cosmetics. Individuals with rosacea seem to be intolerant to many cosmetics and makeup brands.

Where do cosmetic skin reactions occur? What are symptoms and signs of a makeup allergy?

Since people commonly apply cosmetics to the face, this site is most commonly involved in cosmetic skin reactions and inflammatory dermatitis. Women are more frequently affected than men are because they tend to use more cosmetics. The rash produced by such a reaction often appears as a scaling, dry, itchy red area, an eczematous dermatitis, usually confined to the area where the cosmetic was applied (for example, the eyelids may become irritated after applying eye shadow). Occasionally, cosmetic skin reactions can appear as hives (welts). This type of reaction (contact urticaria) can be either allergic or nonallergic. It is often very difficult to distinguish based on appearance whether the reaction is allergic or irritant. Sometimes there may be a stinging sensation soon after an individual applies the offending cosmetic, or the individual experiences a reaction a day or two later. Less commonly, reactions may appear as blackheads, folliculitis, and darkened skin.

Allergies can best be described as: See Answer

What is on the cosmetic label?

The ingredients in a cosmetic appear on the label in order of decreasing quantity. Any ingredient could potentially produce a reaction, but certain ingredients seem to be more likely to cause problems. The use of the terms hypoallergenic, pure, and natural on the label have very little scientific meaning and are essentially marketing jargon. Cosmetics that use the term organic must be manufactured according to certain USDA criteria that have little to do with consumer safety.

Dermatologists have the most experience in dealing with makeup and cosmetic intolerance.

If a cosmetic is being considered as a potential cause of a reaction, the patient can perform a “use” test over three or four days by repeatedly applying the substance to the same site on forearm skin. If a reaction appears, a health care professional can perform further types of allergy testing to determine the precise identity of the offending substance in the cosmetic mixture. One can then avoid the product as well as avoiding further exposure to the same allergenic component in other cosmetic products.

What else could the rash be aside from a cosmetic rash?

There are a number of common skin diseases that are likely to be confused with cosmetic rashes. Perhaps the best way to distinguish these is to avoid using the particular cosmetic in question for two or three weeks. If the rash resolves and then recurs when an individual uses the cosmetic again, it is reasonably likely that the problem is the cosmetic. If the rash persists, on the other hand, then it is probably due to a skin disease like seborrheic dermatitis, atopic dermatitis, or some other problem.

What is the treatment for a makeup allergy?

Mild cosmetic reactions usually will resolve with no treatment as long as the person avoids the offending product. Reactions that are more serious often respond to treatment with 1% hydrocortisone cream that can be purchased without a prescription. If this fails, then it will be necessary to visit a health care professional for a stronger topical steroid.

What is the prognosis of a cosmetics allergy? How long do they last?

If the source of a cosmetic reaction is an irritant chemical, then it seems likely that by avoiding that substance, when present in other products, would be prudent. The immediate reaction subsides in a few days. A dermatologist can help decide which ingredient on the label is likely to be a problem. If a reaction is due to an allergy to an ingredient that documented by patch testing, then it is very important to avoid that particular ingredient by carefully perusing the cosmetic labels. Sometimes this can be challenging because certain additives in beauty products may have a number of brand names. Although the immediate allergic reaction to the chemical will resolve within a few weeks, the propensity to react on re-exposure always exists.

Is it possible to prevent a cosmetics allergy?

The best way to avoid a cosmetic reaction is to avoid cosmetics entirely. Since this is impractical, using cosmetics with a minimal number of ingredients might be helpful. Some cosmetics may contain labeling using the terms unscented or fragrance-free. This distinction can be important because unscented products often contain fragrance chemicals that disguise odor whereas fragrance-free products are supposed to be devoid of fragrances entirely. 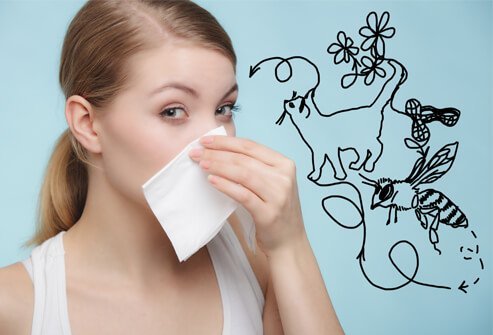 Could I Be Allergic? Discover Your Allergy Triggers See Slideshow

What makeup brands are allergy tested? Which cosmetics brands are the safest?

There is no government body that certifies the safety or non-allergenicity of cosmetics or makeup. From the FDA’s web site: “FDA does not have the legal authority to approve cosmetic products and ingredients (other than color additives) before they go on the market. We also do not have a list of tests required for any particular cosmetic product or ingredient. However, a manufacturer or distributor of a cosmetic is legally responsible for ensuring that a marketed product is safe when consumers use it according to the directions in the labeling or in the customary or expected way. FDA can take action against the manufacturer of a cosmetic on the market if we have reliable information to show that a cosmetic does not meet the legal requirement for safety.”