What is Crohn’s disease?

Crohn’s disease can occur anywhere along the digestive tract.

Crohn’s disease is a chronic inflammatory disease of the bowels, mainly involving the small and large intestines. Additionally, Crohn’s disease may affect any part of the gastrointestinal tract from the mouth to the anus. Crohn’s disease has many subtypes depending on where it is in the body, such as Crohn’s colitis, Crohn’s ileitis, Crohn’s enterocolitis, and others. The most common symptoms and signs of Crohn’s disease of any type are abdominal pain, diarrhea, vomiting, fever, and weight loss.

The inflammation in the bowel can cause shallow erosions and ulcer-like lesions. Some individuals have deep large ulcers that can result in scarring, stiffness, and narrowing of the bowel. Occasionally, these lesions can result in complications such as bowel obstruction or even infections in the abdominal cavity (peritonitis) if the ulcers penetrate the bowel wall.

Individuals with Crohn’s disease experience cycles of remission and relapse of their symptoms and signs.

The exact cause of Crohn’s disease is not known, but it is felt to be an autoimmune disease by some experts while other researchers suggest genetics may also have a role in triggering the disease.

What are the early symptoms and signs of Crohn’s disease?

Crohn’s disease patients have symptoms of

However, these symptoms and signs are not specific to Crohn’s disease, so an evaluation by a physician with laboratory testing, imaging, and colonoscopy are often used to diagnose the disease.

It is not unusual for Crohn’s disease patients to initially have blood tests, stool studies, and abdominal X-rays done to begin to rule out other problems.

Other studies such as CT scans and MRI imaging may show details of the bowel wall, such as thickening or ulceration that may suggest Crohn’s disease. However, the endoscopic and/or colonoscopic visualization and biopsy of intestinal tissue is considered essential for ultimate diagnosis of Crohn’s disease. 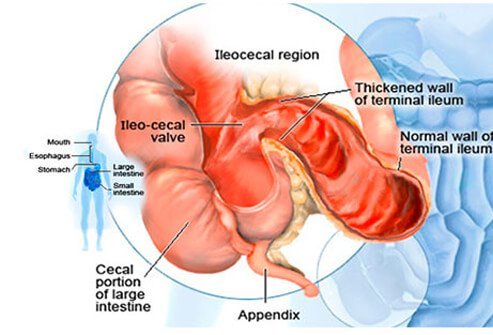 Crohn’s disease is not contagious. What causes the disease remains unknown, but investigators suspect there are genetic, immunologic, environmental, dietary, vascular, microbial, and even psychosocial factors that play roles in triggering or aggravating the disease.

What are the risk factors for Crohn’s disease?

Risk factors for Crohn’s disease include

How does someone get Crohn’s disease?

You cannot “get” Crohn’s disease from another person. However, it may spread in an individual’s gastrointestinal tract. The cause of the spread is usually due to whatever factors precipitated the inflammatory bowel disease. The spread of the disease in the individual may be reduced by methods such as anti-inflammatory medications, medications to reduce diarrhea, nutritional therapy to reduce exposure to possible food irritants, and even surgical intervention.

Can Crohn’s disease be cured?

What is Crohn’s disease? See Answer

When should you call your doctor if you have Crohn’s disease?

Any increase the severity and frequency of signs and symptoms of Crohn’s disease should trigger a visit to a physician. Similarly, if someone starts to lose weight and/or has diarrhea episodes for more than two weeks, he or she should contact a physician. Individuals who have the following symptoms or signs should see a physician urgently or go to an emergency department: