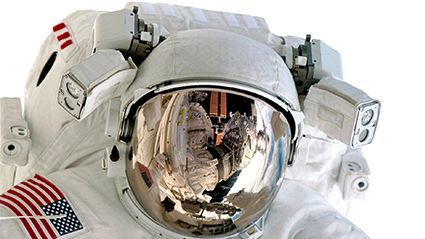 As NASA astronauts set their sights on reaching Mars and building an outpost on the moon, they are likely to need regular, rigorous exercise to keep their hearts in shape, a new study suggests.

Researchers analyzed data gathered from U.S. astronaut Scott Kelly during his year in space from 2015 to 2016 and from Benoît Lecomte’s attempt to swim across the Pacific Ocean in 2018. Investigators said swimming simulates weightlessness.

The results showed that long sessions of low-intensity exercise don’t completely counteract the effects of weightlessness on the heart, which will weaken over time in a gravity-free environment.

Short, regular bouts of high-intensity exercise may be required to keep the heart healthy during long space missions, according to findings published March 29 in the journal Circulation.

The heart’s work to counter Earth’s gravity in order to keep blood flowing throughout the body helps it maintain its size and function. Without gravity, the heart begins to shrink.

“The heart is remarkably plastic and especially responsive to gravity or its absence,” said study senior author Dr. Benjamin Levine, director of Texas Health Presbyterian’s Institute for Exercise and Environmental Medicine in Dallas.

“Both the impact of gravity as well as the adaptive response to exercise play a role, and we were surprised that even extremely long periods of low-intensity exercise did not keep the heart muscle from shrinking,” Levine said in a journal news release.

During his 340 days in space, Kelly exercised one to two hours a day, six days a week. He used a stationary bike, a treadmill and resistance activities. Before he had to abandon his quest, Lecomte’s 1,753-mile Pacific swim lasted 159 days, during which he swam an average of nearly six hours a day.

The men’s hearts were assessed before and after their expeditions. Both lost mass from their hearts’ left ventricles. Both also had an initial drop in that ventricle’s diameter.

The researchers noted that this case study included extraordinary undertakings by two unique people, and more research is needed to learn how the findings might apply to the general population.

Researchers are continuing to analyze Lecomte’s heart images from before and after the swim. They said these would help them understand whether long-term effects of weightlessness can be reversed. No further follow-up is planned with Kelly.

The U.S. National Heart, Lung, and Blood Institute offers a guide to a healthy heart.